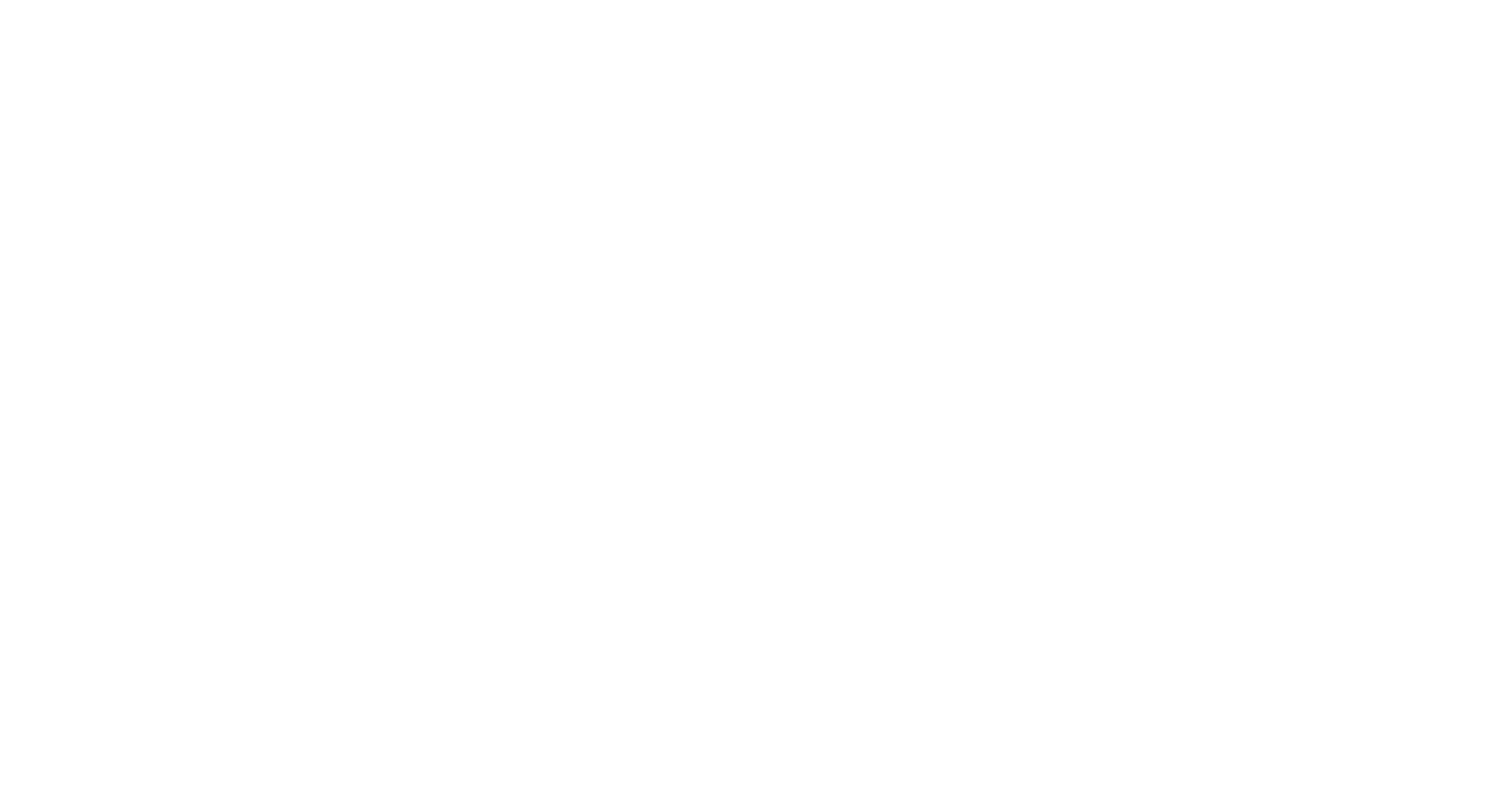 A positive mindset is such a powerful force. There is no better example of this than regular RISE Pilates attendee Anne Boyd, who at the age of 67 decided to take up jogging to lose weight and has since run 8 marathons!
Her story is truely inspiring and we feel honoured to be part of her support team.

Where did you grow up?

I was born in Sydney in 1946 but after the death of my Dad (1949) I was sent to live with Maternal Uncle and his family on a very large sheep station (Maneroo) outside Longreach in central Qld (1950-55). After the family left the property to set up a small business in Yeppoon I was sent to live with my Mother for a year at Canberra Boys Grammar School (1956). Thereafter it was off to Albury to live with a paternal Aunt (1957/58). Thence back to Sydney to live with Mother who after my brother left school had taken a job at the then Wahroonga School for the Blind. She died within weeks of my arrival. I was then boarded with a family in Normanhurst to complete my secondary education at Hornsby Girls High School eventually matriculating with a decent enough Pass in the Leaving Certificate to earn me a Commonwealth Scholarship to study for a BA with Hons in Music at the University of Sydney. As an orphan I was gifted with an independent allowance which supported me pretty much fully through University! How lucky was that !!!

Were you active/sporty as a child?

Music was always my first love but yes I guess I was a pretty active child who always loved the outdoors and would try any sporting activity available though didn’t particularly excel in any. I managed to win the School Junior Athletics and Swimming Championships by specialising in the unpopular activities like Shot Put, Long Jump and the 400M Walk (always won that!). I swimming it was Breast stroke, what passed as Butterfly (with breast stroke kick) and fluked one excellent dive from the 1Metre board. I played hockey, netball, softball, bad tennis, rode horses and enjoyed gymnastics without excelling in any of these activities. Indeed I was the slowest sprinter in my class and could never understand why I couldn’t run faster.

When and why did you first take up jogging/running?

I took up running as a part of a weight management program (‘More is Less’ offered by the Sanctuary Medical Centre then located at the bottom Harris Street) aged 67, encouraged by my then Exercise Physiologist Michael Marthick. I quickly discovered I enjoyed the challenge. We started with just a few jogging steps every 5’ and gradually increased the jogging distance building to 3 kilometres. The weight dropped off. From 84 Kilos (in size 18) I dropped to 60 kilos and size 10. Nice! Even better my Metabolic age dropped from 84- 54. Much better!!!  I felt way healthier and more energetic.
Somehow, I had given birth to an athletic daughter who was a born sprinter but in her 20s switched to long distance running. Although somewhat amused by her elderly Mum’s jogging efforts, she was a great source of encouragement and inspiration. Rather than simply being her bag carrier and support crew at various events in which she competed,  I started to enter the shorter distances.  My first being the 5K Fun Run in the Australian Running Festival in Canberra. Helen ran it with me and copped an earful of abuse because she wouldn’t let me take any walking breaks AND of course I started a bit too fast. However to my amazement I did really well in my age division.

From 5km to a half marathon

My little success in Canberra encouraged me to enter the 2013 Gold Coast 5.7K  a few weeks later. There disaster struck. 4 kilometres into the race I leaned into a drink station but overbalanced and tore my left gluteal medius muscle. Finished limping but laughing. Not laughing a bit later when my thigh turned black and I could hardly walk. But every cloud has a silver lining. I limped into Martin Doyle’s Physiotherapy for treatment and he immediately recruited me into his weight training  classes. My body strength improved quickly enough for me to be running again in several weeks. Building now into longer 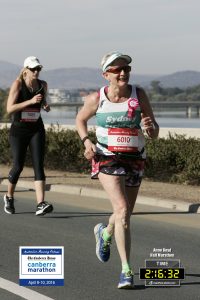 distances. In a little interview on Channel 9’s Today Show promoting the 10K Sun Run (Dee Why to Manly) I admitted to the dream of maybe one day running a Marathon when I returned to Martin’s Strength classes shortly afterwards he recommended that I try a marathon later that year. I thought he was completely bonkers. Running 10K was hard enough. Discovering that I was planning to run the 10K in that year’s ARF in Canberra, Martin persuaded me to try a Half Marathon (21.1K) instead. We were less than 2 months out so there wasn’t much time  to build the distance by adding a few kilometres each week to my long run. The extra coupe of Ks each week were killers but I was amazed to find that the body quickly adjusts to longer distances.  I got to about 18K in training runs around Pyrmont  but when I lined up in Canberra just short of my 68th Birthday in April I had never run the full distance. The rush of finishing was frankly amazing and I decided to put it all on the line and try a full marathon that year in Melbourne.

By then, with Martin’s encouragement, I  joined my daughter’s training group, Sean Williams’s SWEAT, Sydney when they established a Beginner’s group and the Sydney Striders Running Club. I had met the Sydney Striders Membership Secretary by chance on my Canberra run and it seemed Destiny at work when she encouraged me to join. I gained great experience and learned heaps in both. Above all it was

really FUN! From the rather solitary activity of writing Music (my lifelong profession has been as Music Academic and composer) I found I was making loads of new friends of all ages, developed a passion for running and was spending way more time out doors. I was loving early rising and the challenge and discipline of regular training. And I loved the adrenalin rush of competition.
I think Martin Doyle thought I would be content with just one Marathon. So did I ! Neither of us anticipated that he had launched a running monster and that there was to be no stopping me once I’d experienced the unbelievable high of crossing the Finishing Line of my first Marathon in Melbourne at 68 years of age.
Yes it was tough but I had a ball out there. The real party happens at the back of the race. I always make new friends. Share and swap running stories. Enjoy the race vibe and the support of spectators. Usually there is interesting scenery to take in. The main goal is the FINISH which has its own magnetism as you count down the Kilometres (or Miles) the urge to cross that line gets ever stronger. You push your body to its limits. The Finishing rush is like a gigantic purge and very emotional. It is also highly addictive.

My next big challenge was the 2017 Gold Coast Marathon before returning to Melbourne the following year to run my personal best time (5 hours and 8 minutes) and win my age category as a 70 year old. I also managed to win my age division in City2Surf that year. A stellar year turning 70! Best running results to date.  A particular training challenge is to maintain my position in the Green Start group (sub 90’) in City2Surf for as long as possible. A very crowded race it turned out to be just the experience I needed to cope with even worse congestion this year in the London Marathon where 44,000 runners packed the 26 Mile course from Greenwich to Buckingham Palace. It was a matter of ducking and weaving pretty much the whole way.
I retired from the University of Sydney aged 70 and at the top of my 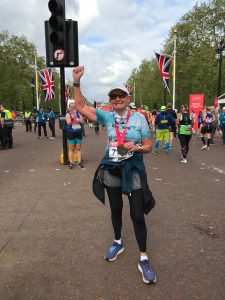 bucket list, as a way of staying off the couch and maintaining best possible fitness, was to run the World’s 6 Major Marathons before I turned 80. To date I have completed New York (2017), Boston (2018) and London (2019). Each has been a unique and epic experience the memory of which I will always treasure. Still to run  are Tokyo, Berlin and Chicago. However, I have a major opera project happening in the Alice Springs Desert Song Festival next year so no internationals runs on my current calendar.

To date,  I have completed 8 Marathons (Melbourne 2014/2016; Gold Coast 2015/2017; New York 2017; Boston 2018; Sydney 2018; London 2019) I’m planning to run Gold Coast again to compete in the Australian Masters marathon championships next month and possibly even Melbourne in October to complete my first 10 Marathons this year before focussing upon shorter distances in 2020 – my  year of the Olive Pink Opera in Alice Springs. I compose most days but this is a truly epic project,  already 6 years in planning and gestation but only recently achieving the momentum of an assured performance.
Since starting running, I have completed many Half Marathons, 10Ks and have join
ed the Park Run movement (free weekly timed 5K community events run and walked, all over the world  on Saturday mornings).

I guess I’ve proved to myself its NEVER too LATE to take up something physically demanding. The health benefits of running are incredible. My compromised left hip requires careful treatment and daily strengthening exercises.   It is incredibly important to build and maintain core strength through activities such as Pilates, Yoga and weight training. My work at RISE in Ruth and Josie’s Pilates classes across the last 5 years provides THE FOUNDATION for my running.  Equally important is cross training. My favourite recovery activity is Swimming and
I regularly pump out 1–2 Kilometres in our local Glasshouse pool – usually twice a week. And when possible, I attend the Bronte Swimming Club Saturday morning Meets in their lovely Ocean Pool.

Its all incentivising and FUN!
Another relatively recent discovery was the Jeff Galloway Run Walk Method. He recommends taking regular Walk breaks throughout longer runs as a means of avoiding injury and aiding much quicker recovery time. Oddly this method can produce faster finishing times. I’ve had no significant injury since adopting this method for my weekly Long Runs. My Marathon times have all been between 5 and 6 hours – often fast enough to place well in my age group but slower than I would like to achieve. My dream is to at least once in my life run sub-5 hours. I have yet to be achieve this goal but I live in hope. The Marathon is an unpredictable and demanding beast that takes one to the limits of human achievement and it demands respect. BUT PERHAPS ONE DAY …..
In the meantime, I will continue to run for as long as I can.

Any tips for us mere mortals?

What I love most about longer runs is the Journey itself. My feet have taken to me to some amazing places, mentally, physically and spiritually that I would never have experienced had I not taken up the addictive sport of endurance running. I believe failing significant impairment or injury, everyone CAN run. Simply start SLOW, build YOUR OWN RHYTHM, take plenty of WALK BREAKS and enjoy BREATHING, taking in the SCENERY and the fantastic sense of CONNECTION that is the great  reward of running long distances.
John Fell
Recent Posts